There's so many webs in here, you'd be forgiven thinking it was some sort of fantasy giant spider den. Slightly less risk of death here though, promise.

We know you've been hearing a bunch of new, scary, hipster terms recently. One being Web 3.0. Thing is, you can't begin to understand the third one, without understanding what came before it. Philosophical, huh?

When we had content kings Joe Pulizzi and Robert Rose at #MarTechFest Dial Up, they detailed their own definitions of Web 3.0. So, TLDR;

Web 1.0. Web 1.0 was all about reading, and getting information.

Web 2.0 was all about reading, writing, and creating. So, users joined social platforms, and these platforms got big because of this created content.

Web 3.0 is all about reading, writing and owning. So, builders and creators can now own a piece of their own community, through NFTs, tokens etc. With Web 3.0, a lot of traditional loyalty programmes, such as for companies like Starbucks, will become token driven. Users will get some value and ownership through these tokens, which they can trade, use for perks, or keep for access purposes. Basically, loyalty becomes valuable, and it's all about ownership.

But let's delve in deeper.

Web 1.0 is the term used to describe the earliest form of the internet. This was the first example of a global network, which offered the potential for the future of digital communication and information-sharing.

Basically, Web 1 was a few people writing content and web pages for a large amount of people. So, people could access facts, information, and content from the source. 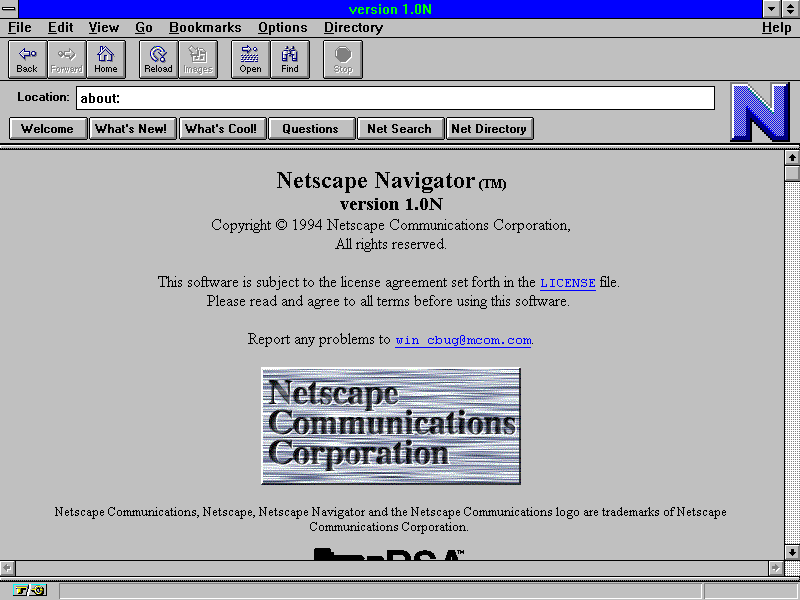 So, this early internet was all about these webpages, which were connected into a system using hyperlinks. Think of a massive, digital encyclopaedia, without the visuals, controls, forms, and interactivity associated with the modern internet. That's why it's known as the "read only" web.

Something like Craig's List, or some shopping cart applications, can still fall under web 1.0 categorisations. It's just all about presenting information, or products, to visitors like a catalogue or brochure.

A few elements that define Web 1.0 can include:

You can check out an example of Web 1.0 here!

But let's hear from an expert. Terry Flew, in his New Media, described the difference between Web 1.0 and Web 2.0 as the:

Move from personal websites to blogs and blog site aggregation, from publishing to participation, from web content as the outcome of large up-front investment to an ongoing and interactive process, and from content management systems to links based on "tagging" website content using keywords (folksonomy)."

This form of the internet emphasised UGC, ease of use, participation and interactivity, and compatibility with other devices and systems. Basically, it became all about the end user's experience. Communities, collaborations, dialogue and social media popped up, and is now used as many individual's primary interaction with the web.

So, it's not just about reading, it's about contributing. Now, that doesn't mean everyone's a YouTuber TikTok-er multi-hyphenate. Instead this can mean creating a profile on the site, or leaving comments and reviews.

A few elements that define Web 1.0 can include:

Basically, to summarise Web 2.0: the user has become the product.

Web 2.0, or the 'social web', involves a number of tools and platforms where people can share their opinions, day-to-day, and perspectives, in a hyper interactive way. So, this can involve:

The issue with Web 2.0 comes from the way the traditional Web 2.0 application works. A user will make a request to the server, which will then be sent to the webpage as a response. The only thing is whoever controls the data on the centralised server has access to a hell of a lot of data.

Facebook, Google and Twitter began storing this data in their servers, in order to make better content using algorithms. In a utopia, this would be used to keep people's experience of the highest quality. But in reality, our data was sold to advertisers. This is where Web 3.0 comes in.

Web 3.0 is described as "read-write-execute".

It is known as the future of the internet. It involves a space where people operate on decentralised, almost anonymous platforms. This means moving away from the big, guiding hands of tech giants like Google, Facebook, and Twitter.

Web 3.0 was originally called the Semantic Web by World Wide Web inventor Tim Berners-Lee, and was conceived as a more autonomous, intelligent, and open internet.

This internet would involve AI and ML which would process content like a "global brain", with all data being connected in a way that is contextual and conceptual. But this didn't pan out. The tech just wasn't.

What has grown from Web 2.0 is more similar to Berners-Lee's original web, which he described as a place where “no permission is needed from a central authority to post anything … there is no central controlling node, and so no single point of failure … and no “kill switch”.

So, the decentralised technologies that have exploded in the last few years - De-Fi, Blockchain, NFTs, AR Cloud, Distributed ledgers, AI and ML, The Metaverse - will mean a move towards data decentralisation and a transparent, secure internet. Something that seems almost alien compared to Web 2.0's centralisation, data surveillance, and all-too-accurate prevalent advertising.

This all leads to a Web 3.0 where users interact in a decentralised way, but with security. From money, to information, all exchanges are conducted without the need for tech companies, banks, or any other middlemen.

A few elements that define Web 3.0 may include:

Thanks to Geeksforgeeks.org, we can see all of this in a handy lil table. Very Web 1.0 of them: 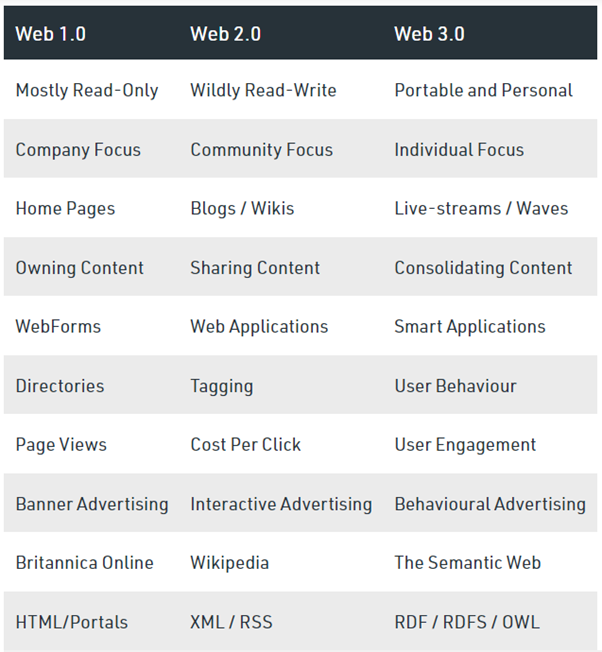 Well, the standard for this form of internet hasn't been established yet. But there's some clues on how it will evolve.

This might be known as the "active web". One of the features which has persisted in the last 2 iterations of the web is the use of search engines. People rely on these sites to give information. But instead, web 4.0 might go beyond this.

Instead of using the search engine to search for "MarTech Alliance Pug Onesie Merch", you might be able to instead remove the slog of going to a search engine, typing it in, looking through the sites, and making a purchase.

So, with Web 4.0, it might remove these steps by integrating virtual assistants more pervasively.

Web 4.0 might introduce a seamlessness we don't yet see with Web 3.0. It takes a lot to translate user requests digitally, whereas Web 4.0 could blur the gap between the computer and the mind. This might lead to Web 4.0 being known as the "symbiotic web". "Active" or "symbiotic" - place your bets now.