What is a Chief Technology Officer (CTO)?

CTO might not officially stand for "Cool, Talented Officer", but it might as well. That one's for you, the CTO reading this article. You're soooo much better than the CIO, promise.

A chief technology officer, or CTO, is an executive-level position in a company whose job is focused on the scientific and technological issues within that organisation. That's some Tony Stark stuff.

They are often the individual who oversees the current technology, and creates the relevant policy. A CTO is a highly experienced technical person who usually has more than 15 years of experience building solutions to improve business processes, increase productivity, and reduce costs.

But the role doesn't just stop at tech. In addition to fixing IT-related projects, the CTO is responsible for developing and evaluating the company's resources, in how they relate to the technology. The goal of the CTO is to examine needs, both short and long term, while using the available capital to make investments that help the business achieve its goals.

However the role of the CTO, while present in the executive team at many companies, can vary wildly. This means, even with a fixed job description within a specific organisation, the key priorities of the role can be constantly changing.

So, how did the role come about? Well, the title seemed to first gain popularity in the late 1990s, when the internet was first becoming popular, and people looked to understand what the potentials of technology were, and how it was about to alter our daily lives.

Many companies, as a result, designated a CTO to work within IT, and charged them with ensuring the company was aware of the latest developments, and were taking advantage of changes in infrastructure, data centres, and network technologies.

But as technology grew beyond being purely a support for IT, the CTO began to evolve into more of an external role. This led to the role taking responsibility for the technology aspects of the company's customer-facing products and services.

Nowadays, the CTO has become more focused on strategy, as every company attempts to achieve digital transformation.

Although, despite its prevalence and importance, a lot of businesses fail to understand the CTO role. It doesn't help that it is often the least defined role in the C-Suite.

So, often CEOs and boards often don't understand the CTOs role, or get it confused with other roles (*cough* CIO *cough*). This makes it particularly difficult when trying to hire one.

But in order to keep up with the speed of technological change, it is critical for companies to stay ahead of fast-changing trends, and anticipate disruptions to their business model. Hiring a CTO, and the best one possible, is vital.

What Does a CTO do?

Due to the ambiguity of the role, it is important that the responsibilities of the CTO become more defined.

Gartner says that the CTO has overall responsibility for managing the physical and personnel technology infrastructure, including deployment, integration, systems management, and the development of technical operations personnel. CTOs also manage vendor relations to ensure that service expectations are delivered.

But like we've mentioned before, the role of the CTO can be defined by the company they're in. So, this can include:

But in addition to these more tangible skills, the CTO role requires personal and business abilities from the individual in the position. These might be abilities such as:

Depending on the size and focus of the company, the CTO position can overlap and interact with other senior tech roles, including the CIO (chief Information Officer), or CDO (Chief Digital Office).

However, some analysts say that CTOs should be looking to evolve their responsibilities in response to their business' demands for digital transformation.

"It's so nuanced and the title in itself can mean so many things to many different people," says Lily Haake, head of the CIO Practice at recruiter Harvey Nash.

"It's difficult to say what the perfect CTO looks like because it will be led by what sector you're in, how big the organisation is and what the ultimate product or service is."

What Are the CTO's Top Priorities?

With the rapid pace of digital transformation, and innovation, a CTO has to keep their eye on emerging technologies that might give their company an edge. So, the CTO should be prioritising the following technologies in 2022:

What’s the Difference Between a CTO and CIO?

Although these roles often get mixed up, the intentions behind the positions, their roles, and responsibilities, are distinctly different.

So, the CTO tends to have a strategic planning role, whereas the CIO has a technology-focused role.

What are the Roles and Responsibilities of a CIO?

The main responsibility of a CIO is the Information Technology strategy. They will also usually manage a team of IT specialists, whose role is to maintain the day-to-day functioning of IT operations.

So, the CIO is responsible for the management, implementation, and usability of IT tech.

Do you need both a CTO and CIO?

Short answer: yes. Longer answer: yes, if you want your organisation to be competitive. You can't just sub one in for the other; asking a CTO to step into a CIO's role, and vice versa, is a recipe for disaster.

No one person will have the skillset, or the hours in the day, to succeed in both roles simultaneously.

But both the CIO and CTO roles are important, especially for bigger companies with distinct C-suite positions. Each position contributes to the company's day-to-day functioning, either internally or externally, and participates in the company's profit growth, in the case of the CIO, and revenue growth, with the CTO. 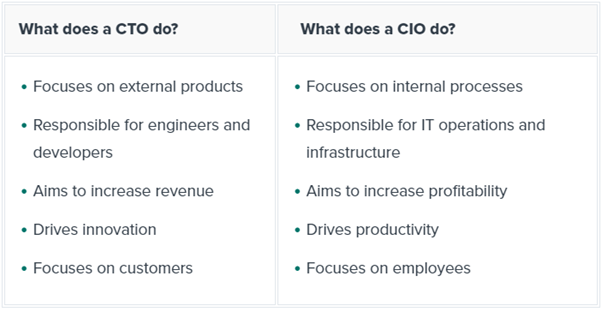 What Does the Future Of The CTO Role Look Like?

The CTO may focus less on the nuts and bolts of the technological offerings, and instead provide the longer-term vision customers need to keep up with the rapidly changing landscape.

So, the CTOs of the past used to have a technology engineering background and deep knowledge of various IT implementations. But the future of the CTO might be somewhat different. While a company's CTO still needs this technological know-how, they'll begin to be less hands on, and more strategic and theoretical. So, think inspirational, less practical.

Plus, like we've mentioned previously, they'll need to have a knowledge of disruptive and advanced technologies, including AI, ML, and big data. Without these, they'll be unable to set a strategic course for a company.

The role may even stray outside further, reaching Research and Development, data science, or even sales.

Plus, as CTOs gain business acumen, they may even evolve into tomorrow's CEOs, or 'Chief Innovation Officers'. So, due to the popularity of digital solutions, the number of CTO roles will continue to grow, in number and importance.

This post is part of our "What is a..." series, which compiles the top job roles in the martech industry today. Others include: