Scott Brinker's Martech Predictions for the Decade to Come

It’s no secret that 2020 has been a wild ride, but with this rapid pace of change we’ve seen some rapid results – particularly in the marketing world.

A report from Twillio showed an incredible 97% increase in digital transformation with an accelerated digital strategy by 6 years over the course of the pandemic. Another report by McKinzy showed they had recognised there had been 10 years of growth in US e-commerce penetration within the space of just 3 months.

Even Scott Brinker himself had to amend his famous Martec’s Law illustration between tech change and organisational change this year as the rate of change exploded. 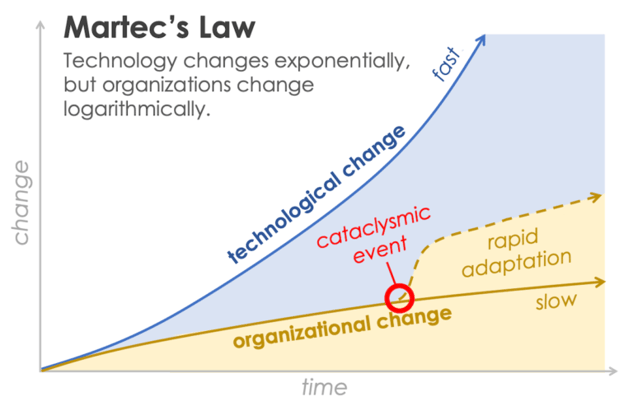 There’s no doubt that throughout this impressive change, it’s been a tough year. So Scott Brinker takes us through his top 5 trends for the decade ahead. (Here’s hoping we can get there at our own pace.)

The democratisation of tech begins with expertise and cost needed to create however, as the process becomes easier and cheaper, it’s no surprise that we see production go up. With more potential to creators, the more we create.

As Chris Wanstrath, CEO of GitHub wisely said, “the future of coding is no coding at all.”

We are currently seeing a rise is no code martech tools, and the demand is predicted to soar. No code tools not only offer the advantage of speed of production, but they also open up opportunities for diverse ideas to explore so creativity can explode.

Where platforms enable specialisation and innovation (for example in the likes of HubSpot and Salesforce), networks facilitate connections and sharing (within the likes of Facebook and LinkedIn) and marketplaces marry together producers and consumers (with the likes of Air B&B and etsy).

In the industry today, marketers often rely on each of these examples to deliver a great customer experience and convert the consumer but often at the cost of investing time in one and not the other.

A sensible starting point here would be to remind you of a little something called the Marketing Technology Landscape. A little logo graphic created by Brinker which is now, oh – I don’t know… 8,000 technologies deep! Taking it back to the first version of the Supergraphic in 2011 to the year 2020 the Landscape has grown an incredible 5233%! To be honest, he could have just left it there. But he didn’t…

In fact, the Landscape if just the tip of the iceberg. IDC IT Industry predicts over 500 million digital apps and services will be developed and deployed using cloud native approached by the year 2023. (And that’s not even talking us half way through the decade).

With more emerging no code platforms on the horizon, Brinker sees marketers in the business of deploying apps like content. Are interactive apps going to be the content of the future?

In this past decade we’ve got pretty good at gathering data, and IDC estimates we’ll have gathered 175 Zettabytes of data by the year 2025. Just to put that into perspective – 1 Zettabyte = 1 TRILLION Gigabytes.

Yeah. That’s a lot of data.

However another study highlights that 44% of potential data goes uncaptured, and of the remaining 56% that is captured, 43% remains largely unused.

Computer intelligence and machine learning is already on the rise, and it’s looking unlikely that machine is about to become man’s best friend. In a survey asking ‘How concerned are you that the emphasis on AI and MI may limit your personal growth?’ 48% of 25-40 year olds responded with ‘very concerned’.

But there may still be hope for us yet. Brinker predicts that there will still be a need for humans and the work machines will offer us, will free up our time to do work that only us humans can do. We will have the time to be empowered with creativity, to collaborate with colleagues and with customers with more time to think about innovation. Whereas, the manual tasks will be taken on by machines. We’ll admit, that’s not sounding too shabby…

We’ve got an incredible decade ahead with the opportunity to re-write the collaborative future between human and machine. The next decade to come is the “Age of the Augmented Marketer”. We're looking at some exciting and fast-paced times ahead!

Gasping for more? Brinker has released his 53-page paper diving deeper into the Five Trends in Marketing Technology for the Decade of the Augmented Marketer in collaboration with Jason Baldwin, the global head of product management at WPP.