Who is Scott Brinker?

You associate the name "Scott Brinker" with one thing - the famous martech landscape supergraphic. It's pretty good, right? Not a bad thing to be known for. But there's far more to the man behind the map. 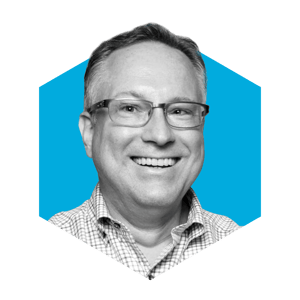 Scott has been analysing marketing technology and its impact on marketing organisations and individuals for more than a decade. In fact, he's even written the book on it. Having authored the best-selling book Hacking Marketing, all about adapting software management practices (such as agile methodologies) to marketing teams, he has shown an attention to detail and awareness of the industry that most people miss.

But to get to this point, Scott has traversed a number of industries over a number of decades, to build up his one-two punch of computer programming and entrepreneurial skills.

Although, he did start on a pretty impressive footing. Scott initially attended the University of Miami on early admission during his junior year in high school. But after joining Galacticomm, the company founded by Tim Stryker, and which created the Major BBS bulletin board software, he withdrew from the university and took a full-time role.

As an early entrepreneur, I had actually dropped out of college. I spent ten years building up the businesses from that games company, then I ended up going into web development for companies like Citrix and Siemens. I decided to go back to college to finish my degree in computer science. And – I guess because I had a bit of a chip on my shoulder from having dropped out – I went on and got a master’s degree, too.

In fact, Scott had been one of the company's first customers, having purchased the Major BBS and one of Galacticomm's multi-modem cards in September 1986 when he was 15 years old. At this age he was already a computer-programming-entrepreneurial-whizz-kid, launching Moonshae Isles BBS in South Florida that year.

Then, in collaboration with Tim Stryker and Richard Skurnick, he created a number of multi-player adventure games for the Major BBS, including Quest for Magic and Kyrandia, between the years 1986 and 1990.

"As a kid, I was really interested in games – pretty early on I started working in the fun world of multiplayer games!"

"Right before the internet took off, with people running bulletin board systems, dialling in with their modems. I enjoyed that a lot, but not just the game side of it. I loved the dynamic of people connecting together online, unleashing new kinds of creativity and engagements. It seems so normal now, but this was the really early seeds of the world we all live in."

Then in 1993, he was promoted to president and CEO of Galacticomm. A few years later, the company bought in Robert Shaw to take on the CEO position, and in October of 1996 Galacticomm was sold to a group led by Peter Berg and Yannick Tessier. After this, Scott sold his interest in the company and left to pursue a new venture with Christopher Robert the CTO of Galacticomm at that time.

A few years later, in 1998, Scott co-founded i-on interactive Inc. with Anna Talerico, Justin Talerico, and Christopher. This was initially a boutique web dev firm with a number of well-known clients, including Yahoo! Office Depot, Citrix, and Siemens. Scott served as president and CTO of the company. Scott and the Talericos began to develop a post-click marketing platform called LiveBall in 2005, a software-as-a-service landing page management system. Then, in 2007, the company stopped taking on new web development projects, and focused on building a new business, which Scott described as "landing pages 2.0".

Also in 2007, Scott graduated from the MIT Sloan School of Management with an M.B.A, becoming a part-time Sloan Fellow.

The next year would be a big one, and start Scott down the path of becoming the "Godfather of Martech". In 2008, he started his Chief Martec blog, which began as a project to examine "the intersection of marketing, technology, and management".

Then, the first marketing technology landscape supergraphic was born in 2011.

The reason I did it was, at the time, I was trying to advocate to marketing executives that they should really consider hiring technical talent into their teams, that that was going to be a crucial part of what the marketing organisation needed.

So the reason I put together that slide of around 150 tools, was that I was trying to viscerally communicate just how technologically dependent marketing was becoming, and it worked!

People were like, oh my goodness 150 technologies how will we ever keep track of them all!

In 2014, Scott began the MarTech industry conference in Boston, which is now run twice a year. Since its inception, the conference has aimed to "explore essential changes, challenges, and opportunities in consumer behaviour -- and the marketing technologies that can help you achieve your organisational goals."

Then, in March 2021, Scott joined HubSpot as Vice President of Platform Ecosystem.

Talking about the experience, he said:

"I joined HubSpot as their VP of Platform Ecosystems, helping to grow relationships with all the great companies whose apps get connected into the HubSpot platform.

In parallel, I was doing web development stuff, running the tech team at this web agency. Our firm would be hired by the marketing team of these Fortune 500 companies, and it would be my job to talk to IT and say: okay, how are we going to implement this new tech? Because mostly, IT and marketing didn’t talk to each other. It wasn’t hostility, or anything – they just lived in different universes."

So I did shuttle diplomacy between the two teams, and that got me really excited about this emerging set of professionals who were comfortable working in both worlds.