Google Pushes Third-Party Cookie Demise to 2024: What This Means for You

In a move that has surprised almost no one, Google is once again delaying its plans to stop its Chrome browser from tracking users.

This is the second time the company has pushed back its deadline, now to 2024, since the move was initially announced in 2020. Both times the company blamed the delays on difficulties coming up with new, innovative ways to track users that would stay privacy-friendly.

But if you've been living under a sound-proofed, insulated rock in a far-off desert you might still be asking: why does this matter to marketers?

A study conducted by the company found that a world without third-party cookies would decrease average revenue for the top 500 global publishers by 52%.

Although a few browsers have gotten rid of the third-party cookie already, including Firefox and Safari, Chrome is going to be far more significant. Google Chrome makes up 56% of the web browser market and accounts for more than half of global web traffic.

“We became a little bit dependent on third-party cookies because it was easier, faster, and required less planning and integration [than traditional marketing],” said Matt Naeger, who heads US strategy for the performance marketing agency Merkle.

Google's business model likely factored in its latest decision. It is highly reliant on third-party cookies for some of its high-earning ad business. Plus, it is a major player in the digital advertising landscape, which will be shaken up by the change. So, they've never been pushing to make the shift.

Google’s plan to stop cookies has caught the eye of European regulators, including the UK Competition and Markets Authority. The regulator has raised concerns that if Google shuts down data on its ecosystem, it could be to the detriment of independent publishers and ad technology operators.

The search giant announced in January 2022 that they would use the two years to come up with a more private alternative that users and advertisers would be happy with. It has since rolled out some attempts, most significantly the Federated Learning of Cohorts, or FLoC.

All of this is one part of a programme called Google's Privacy Sandbox, which was launched in 2019 to develop new ways to target and measure ads on Chrome without using personally identifiable information. Privacy Sandbox initiatives are also being tested on Android devices.

Google's new timeline originally suggested all this would come into effect at the end of 2023. But the company has just announced this will be pushed back even further. Google blame the lack of success of FLoC for this move.

So, let's take a further look into why cookies matter, and what alternatives you need to invest in.

Well, according to research, not many people.

In fact, 75% of mobile cookies were rejected, and 41% on desktop. Plus, even in 2018, Viant found that many marketers believed that tracking cookies would no longer be needed. Other challenges seemed more pressing, in reference to barriers to digital ad campaigns, including: 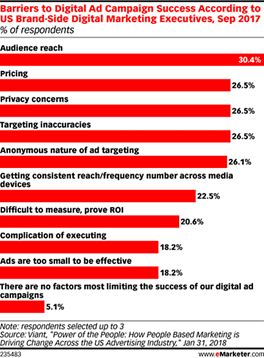 Regardless, marketers keep relying on cookies, and now must be prepared to move on.

Why is zero party data the future?

Well, we're facing a rapidly changing landscape. So, as marketers, we need ingenious solutions. Zero-party data is one of them.

Growing privacy concerns have been in the spotlight for a while now. And with big moves being made by big companies surrounding data, it's important that we keep up, and keep prepared.

As adtech privacy regulations like GDPR and CCPA continue to protect consumer rights and data, zero-party data is on everyone's lips. So, what are these changes?

"The CMA is concerned that Google’s alternative system will create a walled garden of sorts that will “cause advertising spend to become even more concentrated on Google’s ecosystem at the expense of its competitors”.

In the walled gardens of Google, Amazon and Facebook, the customer remains logged in with these ecosystems across devices. This is why these companies have a wealth of first-party customer behavioural data at their fingertips.

The shift to mobile has made cross-device remarketing...difficult since most mobile devices and apps don't accept cookies. Cookies are also device-specific, so when someone switches from mobile to a personal laptop, to a work laptop, the retargeting trail goes cold. You might even end up targeting people who have converted on other devices. This is where people-based advertising comes in.

People-based advertising relies on a unique identifier that is related to the user, not the device.

"People- based marketing uses customer data from both online and offline sources to create detailed, rich customer profiles. Brands use this data to determine important outcomes, like sales by each individual person over a certain period of time, patterns of media exposure, and the entire customer path-to-purchase This helps them to gain insights on what drives awareness, positive brand equity, sales, and advocacy."

People-based advertising doesn't rely on third-party cookies to track users, or gather data, and targets customers at the right time, in the right place.

According to BounceX, it all comes down to 3 key elements:

Marketing Leaders Book Club - How to Make the World Add Up

Book of The Month: The Choice Factory by Richard Shotton