3 Top Examples of Effective ABM Campaigns (and Why They Work!)

Just laying out a bunch of half wilted sandwiches for your clients when they turn up to meetings isn't enough anymore. Instead - wait, is that egg and cress? Well, I guess I could take a triangle or two.

According to SiriusDecisions, 92% of B2B marketers find ABM to be "extremely important in their overall marketing efforts".

Account Based Marketing (ABM) is about putting at the centre of, well, everything. They're the big shot. They're the VIP.

With ABM, or Account-Based Marketing:

So, what principles do you need to keep in mind?

1. Make it easy. Minimise the number of touchpoints and hoops your client has to jump through. This might be as simple as making your CTAs more accessible.

2. Personalise, personalise and personalise. Your clients want to be treated like B2C consumers. They want personalisation, they want the VIP treatment. Segment your accounts and consider the level of personalisation you can commit to.

3. Think outside the box. Though digital is an effective go-to, you might delve into other mediums. This might be direct mail, and other technologies.

So, let's have a look into which companies are doing ABM, and doing it well.

GumGum, an applied computer vision company, stood up to bat for their ABM campaign. That pun will make sense in a minute.

When the company wanted to win over T-Mobile, their research found something pretty interesting about the CEO. No secret wives or tax havens, nothing like that. Instead, they found that T-Mobile CEO John Legere was a huge Batman fan.

So, using this, they created an effective and highly personal campaign that brought John into the theming, tone, and story of GumGum.

From the minds of the GumGum team came an impressive piece of interactive storytelling - a comic book. Named 'T-Man and Gums', which sounds like a cartoon that encourages kids to brush their teeth, was a big success. Created by a team of editors, writers, and illustrators, 100 copies of the book were sent to T-Mobile and agencies of record.

This move was a great way to establish an initial relationship and increase engagement with a new, desirable account. Plus, it could be used to engage with new buying committees within an existing account.

Before we have a look at the process, let's see the results. Payscale saw target account traffic increase by a pretty hefty 500% with their ABM campaign.

Payscale, a compensation software and data company which helps employers manage employee compensation, had an issue. They wanted to deliver relevant ads to different segments and personas. So, they turned to their digital marketing team.

This team was asked to grow their account based marketing programme and measure its impact. So, first step - the sales and marketing teams aligned the target accounts to go after. For different segments, the key decision makers had to be different. For example, the sales team provided the data such as job titles, whereas the marketing team set up campaigns that drove the right people, personas, and accounts to their highest-converting and robust content pieces.

So, what were the results? Well, the company saw an increase in target account traffic of 500%. Plus there was a 45% decrease in time to close for active opportunities, and a 6X increase in ROI.

Okay, this ones pretty weird, but pretty good.

Engagio, a B2B marketing software company, was expanding their services. As a result, they needed to start new conversations, with new accounts. This meant coming up with an innovative, eye-catching idea that would allow them to get their foot in the door at a few of their target companies.

So, what could they do to surprise and delight their target customers? Well, it was something that had a not-too-shabby 31% meeting rate.

Engagio realised that many of the key decision makers they wanted to get their hands on attended Dreamforce, Salesforce's annual conference. 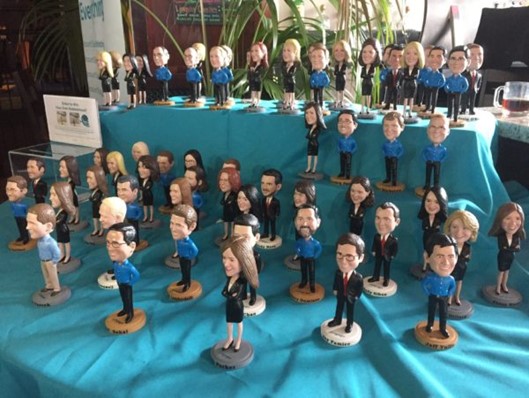 Then, they took pictures of the bobbleheads and emailed their targets letting them know where they could pick up their mini-me at Engagio's Dreamforce booth.

As a result, most of their target prospects picked up their bobbleheads. and 31% attended highly valuable sales meetings.

So, this was a campaign with three separate touches. Number one, an email inviting the decision maker to pick up the bobblehead. Number two, a hosted event to hand out the bobbleheads. Number three, an offer to shop the bobblehead to them if they attended a meeting with a rep.

All this for the cost of a bobblehead vendor on Etsy, and an ABM intern.

Basically events allow for a connection to be made with key decision makers, in a way which feels natural and relaxed. Plus, they can be adapted to fit the needs of the company; be it in person, hybrid, or virtual, the type of event can be changed up to fit the number of decision makers, and the topics they're interested in.

So, what did Drift do? Well, when the company had to pivot due to a...certain pandemic, they came out the other side with a new event - RevGrowth. A stand alone event at first, RevGrowth became a series.

The first summit had more than 8,500 registrants, even with only six weeks planning.

The key to this success was the ability of Drift to engage and invite target ABM accounts, and streamline the registration process. They published a graph outlining the campaign in action, as can be seen below. 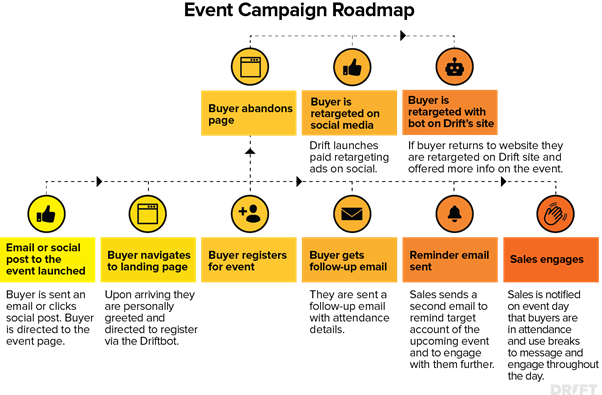 The company uses their "driftbots" to capture event registrations, and found that switching from traditionally used forms to bots has increased their conversions by as much as 10%.

Once someone had landed on the RevGrowth page from a personalised ad or email, they were then shown the registration playbook. The bot then used a reverse IP to greet the target accounts by name. 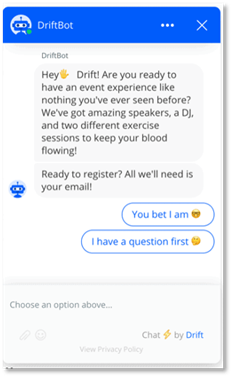 Then, if they abandoned the page, Drift used extensive retargeting to bring them crawling back.

This was a combination of retargeting ads and retargeting bots. Return visitors were greeted and directed to continue registering for the event. When an account landed on the site, Drift's AEs are notified, making it easier for them to reach out and engage.