Tech that is transforming traditional reading

I saw a man reading a book the other day. You know what I did? I punched him. I shouted, “get with the times, grandad!” and kicked him as he was keeled over on the ground, before throwing his book in the river and running off.

I’ll let you in on a little secret; none of that happened and I absolutely do not recommend that you attack people who are reading books, but you probably know what I’m getting at, right? It seems like books are being phased out.

I so hope you’ve seen the Lord of the Rings films or else I’m going to look like a total weirdo. I probably do anyway. We move on…

Truthfully, it doesn’t look like the humble book will ever really fade away into obscurity – people like owning a physical copy of things they’ve read and in general they look nice – but that’s not to say that the impetus can’t be taken off them in some regard.

In many ways, it already has. The chances are there’s at least one Kindle in your household and if there’s not, that’s probably because of the Kindle or Books apps available on phones and tablets. With all of that in mind, Kindles aren’t necessarily changing the world of traditional reading since regardless of the hardware, we’re still reading the same words.

But then there are apps like Blinkist, that look to change the way you read in ways you might not have known possible. Despite being around since 2016, you’d be forgiven for not being all too familiar with Blinkist, though what they do is really quite remarkable.

Essentially, the long and short of it is that they condense whole books into 15-minute reads, give or take, and if you pay for their subscription service, you can get those as audiobooks.

The reviews are quite favourable, despite the whole idea of the app seeming like sacrilege.

Back to eBooks for a minute though; as per Statista, 25% of all readers in the US are using eReaders (such as Kindles and whatever the other brands call theirs) instead of books and this doesn’t take into account all of the illegal eBook downloads in the country.

As of 2018, and somehow Statista have managed to quantify this, there were 16,500,000 illegal book downloaders, which accounted for a net loss of $315,000,000. The mathematicians amongst you will know that that’s a pretty big number. Bigger than a lot of other numbers, that’s for sure.

In many regards, the piracy side of the eBook landscape is changing how we read for good. While people are finding success in self-publishing online, many companies are losing money due to the relative ease of illegally downloading a book. Back in the day you’d need a photocopier and absolutely too much time to pirate a book – now all you need is a dodgy torrent. Nevertheless, in 2018, the revenue generated from eBook sales in the US amounted to just under 1.02 billion USD.

Meanwhile on the listening side of things, it seems like audiobooks have been around forever, but as with almost everything else, the internet has made them far easier to acquire and in turn consume. Sometime in the late 60s, cassette players were added into various cars as standard and more or less since then people have been listening to books (although it could be argued that this really started in 1932 with the first book being read on vinyl).

Now though, the likes of Audible and Apple Books have made things a lot more mainstream. Research from Harris Interactive found that in 2019, 15% of people in the United Kingdom listened to audiobooks. This is also being by the emergence of Smart Speakers, such as Amazon Echo, Google Home or Apple HomePod. A poll from the Audiobook Publishers Association found that a surprisingly high 46% of people who own a Smart Speaker have used it to listen to at least one audiobook, and that was back in 2019 so the number is presumably higher now.

Why is all of this? The answer is obvious really and you probably guessed it at the top of the article - time. 57% of people in the UK, when asked, explained that they listen to audiobooks because of time constraints. Not many of us are blessed with the ability to multitask while flicking through a book, but even on a personal level, if I have a big drive coming up I’m definitely whacking out Stephen Fry’s Mythos or Nick Hornby’s Fever Pitch. If you want that in the form of an easy-to-digest stat, then that’s 100% of the people writing this article sometimes listen to audiobooks.

While traditional reading will never really be phased out by technological advances and books will remain a staple of entertainment up until the point when paper is outlawed, there is a new and emerging impetus on time efficiency and multitasking. From websites headlining their articles with how long it takes to read them, to apps designed so you don’t have to read a whole book to get the gist of it (just as Hemmingway intended), it’s a brave and distracted new world out there.

Buying a book can be akin to supporting your favourite artist. Yeah I have Apple Music but if I particularly like a band and think they deserve more than the pitiful royalties streaming services offer, I'll actually buy the album or a t-shirt from their website. Maybe we should now start thinking of books as merch to support favourite authors?

Speaking of which, if you want to pick up a book from our wonderful Marketing & Technology Book Club, now's your chance! 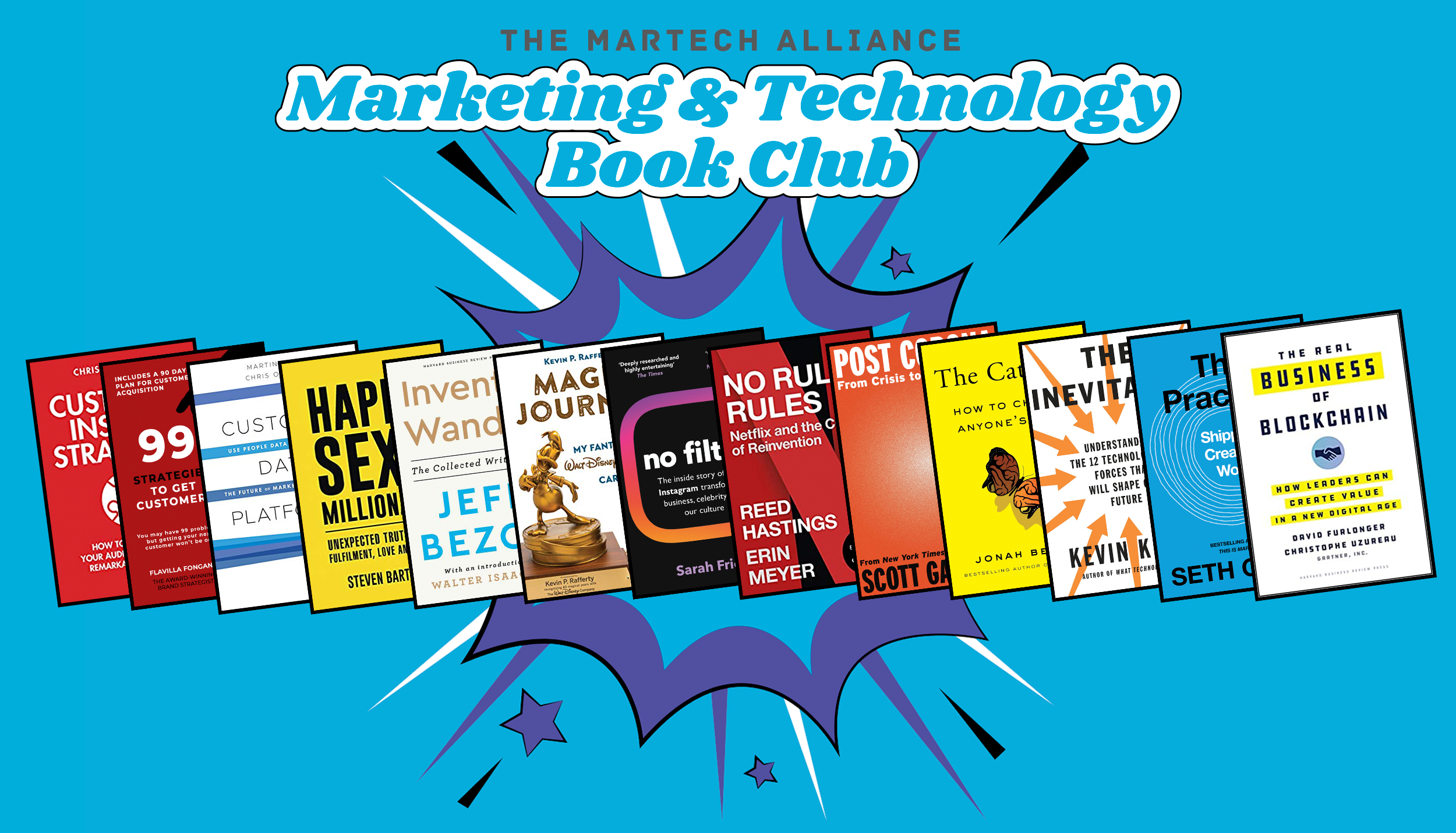 TikTok's Algorithm in 2022: Here’s How it Works

How to Effectively Measure Email Marketing

It’s The 90th Birthday Of Lego - What Can We Learn From Their CX?

Why You Should Read Global Content Marketing by Pam Didner

Combining Zero-party Data and Customer Loyalty in a Cookieless Era

How to Harness the Power of Email Competitive Intelligence

Who is Pam Didner?

Why We Wrote a Book on Precision Demand Marketing

How Marketers Can Prepare for a Recession

Which Social Media Platform Algorithm Will Work For You?