Here he is. D.K himself. Giving us a rundown of the three big things that matter: Meaning, metrics, and mojo. Try to ignore the fact that they sound like three members of a 70s punk band. 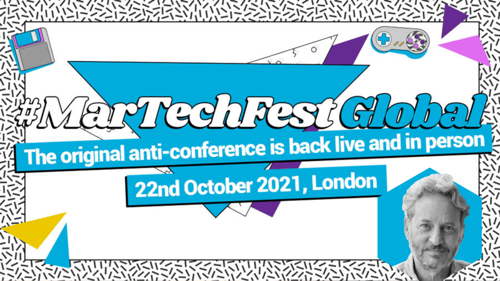 Doug Kessler shows us the history of marketing in just one chart. Wait, you want to see it? Okay, okay, fine. Here it is: 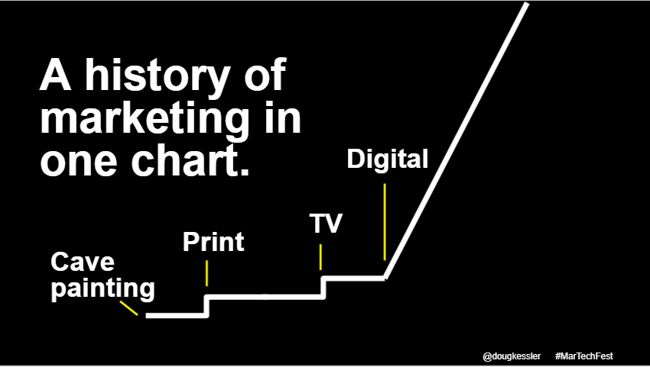 So, advertising used to be a case of 'come up with an ad, make the ad, hit people over the head with the ad until they buy something.' Then digital came along. And everything took off. Digital ended up splattering marketing into many, many different pieces.

It was shattered into various disciplines, agencies, and specialists. And everything started getting very technical, and very intense.

So, as people are starting to focus on these disciplines, it works well to zoom out. Doug asks us, to ask ourselves "what really f*cking matters".

Spoiler alert: the answers in the title. By getting people to align around the three M's:

You'll be able to see a big difference, and a bigger picture.

This is all about relevance and resonance, says Doug. That means saying stuff, that means stuff to somebody.

As you look at the data that drives demand gen, brand is what works. Basically, brand is demand gen - they're not in opposition. When you have a good brand, everything works better.

So, brand is back. And if you have a brand empty of meaning, everything will be harder.

There's plenty of empirical data behind this too. In fact, Binet and Field's studies show that brand and demand gen work together.

“Brand building excels at driving long-term growth; it works on an emotional level to create long-term memories and associations...”

The fact is that brand excels at building long term growth, long term memories, and association.

Doug dubs Simon Sinek the "Shakespeare of selling stuff". In his TED Talk he discusses how marketers should start with "Why". It's all because people don't buy what you do, or how you do it, they buy into why you do it. 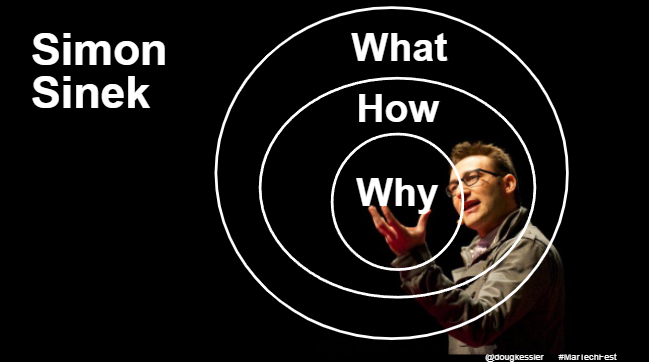 But all of this has led to some...disastrous marketing campaigns.

I think we all remember the Kendall Jenner Pepsi ad (although 99% of us wish we didn't). It's a great example of people going to far with Sinek's idea, leading to a reality tv star giving "sugar water" to a "Nazi" and saving the day.

So, it's understandable that there's some cynics out there. Cynics that say "I don't need a pair of trainers that'll prevent all natural disasters " You need to find the sweet spot, says Doug.

Finding a credible "why", opens up a new area for your brand and your content, one that taps into the meaning and the emotion. You need to find something in the middle of the bog-standard “bringing all your procurement together in one place” and the hyperbolic “saving the planet one invoice at a time”.

This might look like “stomping out waste from business spending”. All this creates a new space for your brand, that you can control. But an even better example, says Doug is:

This example feels meaty, it feels true, it feels relevant. It accesses that emotional core you find in the best brands. It comes from something real, from a belief that you feel strongly about.

So, it's about celebrating your beliefs, not your values. Remember, your beliefs about the world are ones you share with your ideal prospects.

Doug says this part is the views of metrics and data from a creative director who loves data insights, but doesn't live data insights. So, he gives three ways to achieve this:

He recommends turning data points into sentences with the word 'so' in them. So, every statistic can be stated as a 'plain English' sentence. Plain English is coincidentally how people tend to describe me.

This helps turn data into insight. 'So' tells people there's something that needs to be done, or changed, or continued, or stopped.

For example, says Doug: "Our bounce rate went up 90%” can be followed by "SO we might want to remove Boris Johnson from the home page…” It's all about actionable action. If the data doesn't have a 'So', maybe the data point isn't that important.

This is what the last 5-10 years have been about:

So, people tended to optimise for their specific swim lane. But optimising blindly for one, could affect the others at best, and hurt them at worst.

This means that metrics need to be able to go across these swim lanes. The biggest changes for the next ten years will involve this. This has led to the Rise of the Ops that Scott Brinker has been suggesting.

It's all about patience. Things might dip, and the project will be cancelled. But marketers need to remember: things might take a while to pick up. If there's a twinkle, or a passionate employee behind it, and the data isn't catching up, consider hanging with it.

This is the most important, and most rare, of the three. It's all about confidence, attitude, and energy. It's a passion, a belief, a sense of mission and the involvement of people who are enjoying what they do.

Mojo is a force multiplier, it's a budget multiplier, says Doug. A brand with mojo will run circles around a brand with no mojo. All the greatest brands do it. And as a result, their content gets shared and opened.

The thing is the mojo is already in your company, but the marketing filters it out. Think of all the people in your company that are filled with energy and passion, but something is stealing the mojo before it gets to market.

Doug suggests the "The Mojo Gap" is a huge problem, but also a huge opportunity. It's a way to get companies to stop trying so hard to talk like everyone else in their industry.

So, let's jump into somethings Doug has noticed the best brands do, and do well:

So many brands, especially in B2B, want to say everything all the time. But the mojo move is to say less. In fact, it's about saying that one thing well.

This is about starting with a psychological insight, and seeing where it takes you. Doug gives an example: wanting kids to stop playing on train tracks. Apparently the huge, dangerous, metal death-traps on wheels barrelling towards them at top speed does nothing to prevent the allure of a high-stakes game of hopscotch.

The insight, the psychological truth, he says is this: kids are less scared of death than they are scared of embarrassment. And with this, we get "Dumb Ways to Die". This was an animated musical showing blobs getting killed in all sorts of fascinating and macabre ways. And it was everywhere. 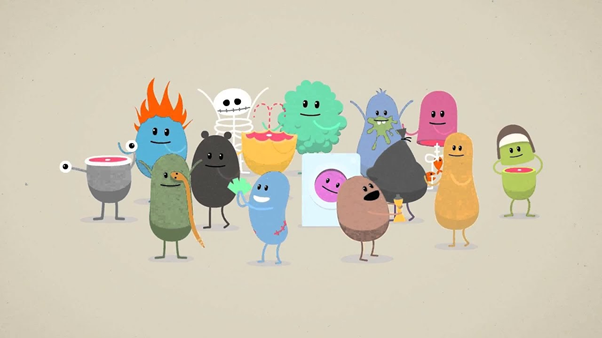 It went instantly, globally viral, earning $50M worth of free coverage in the first two weeks.

In comparison, the "Remember: Be Safe" campaign was an above average piece of content. They even had a train slamming into a real car. 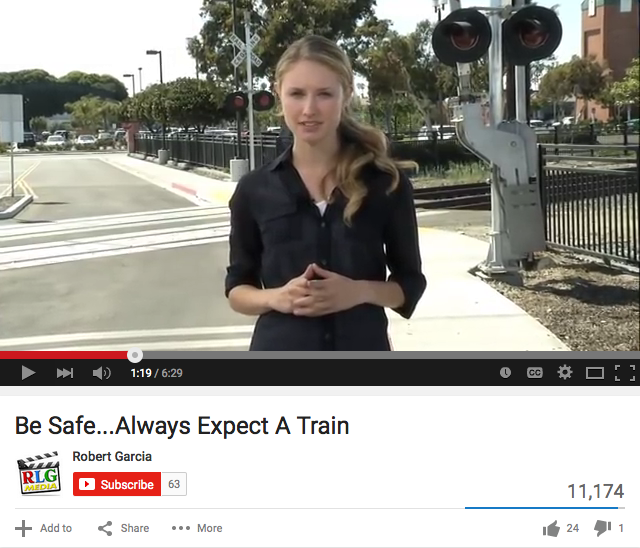 But "Dumb Ways to Die" out-performed it by 16,112 on YouTube. Mojo is a budget multiplier.

So, don't just try and convince customers. Make them feel something. It's all about head plus heart.

This means going back to meaning and brand, and the power of emotion being tied to idea. A lot of this can come from how you construct, and use, your brand voice.

It could be as simple as the difference between Mac promoting specific product differences - PCs get viruses, Macs don't, and Mac's saying "Macs are cool. PCs aren't cool".

It's great to be great at a specific discipline, whether it's CRM, CRO, SEO etc. But it's important to zoom out once in a while. Doug believes that marketing moves markets by moving people.

So, here's his formula for success:

Mojo: Confidence and attitude and energy